What is Palm Sunday all about? 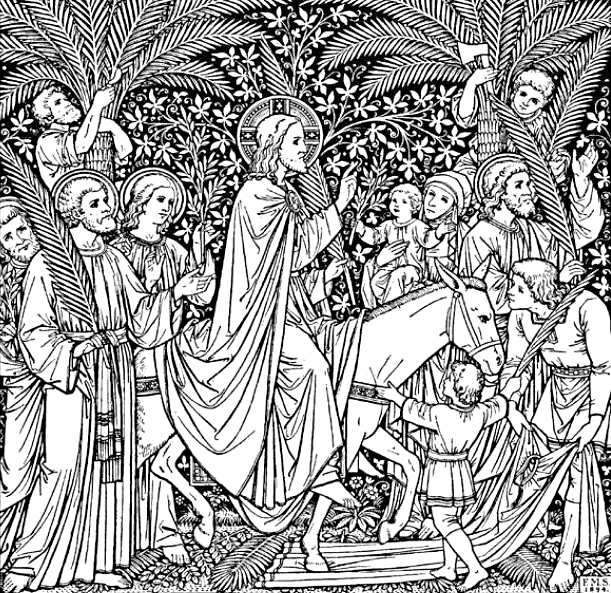 On the next day a great crowd that had come to the feast heard that Jesus was coming to Jerusalem. They took branches of palm trees, and went out to meet Him, and cried out: “Hosanna! ‘Blessed is He who comes in the name of the Lord!’ The King of Israel!” Then Jesus, having found a young donkey, sat on it. As it is written: “Fear not, daughter of Zion; see, your King is coming, sitting on a donkey’s colt.” His disciples did not understand these things at first. But when Jesus was glorified, they remembered that these things were written about Him and that they had done these things to Him. Now the crowd that was with Him when He called Lazarus out of the tomb and raised him from the dead bore witness. The crowd went and met Him for this reason: They heard that He had performed this sign. So the Pharisees said among themselves, “See, you are gaining nothing! Look, the world has followed Him!” John 12:12-19

Do you know what Palm Sunday and the events of that day are all about? Yes, you may know what happened on that day — how Jesus rode into Jerusalem on a donkey’s colt and was hailed King of the Jews, but why? What does it all mean?

If you don’t know, you’re not alone. Jesus’ own disciples didn’t understand these things until after Jesus had risen from the dead and was glorified. As John writes, “But when Jesus was glorified, they remembered that these things were written about Him and that they had done these things to Him.”

What was written about Jesus? From the Book of Zechariah, we see the ancient prophecy: “Rejoice greatly, O daughter of Zion! And cry aloud, O daughter of Jerusalem! See, your king is coming to you; he is righteous and able to deliver, he is humble and riding on a donkey, a colt, the offspring of a donkey” (Zech. 9:9).

We see these very words fulfilled; the people shouted words of praise to Jesus as the Messiah and Savior of Israel. They hailed Him as their King. And, Jesus was riding upon a donkey’s colt, just as the prophecy said and similar to the way King Solomon was made known as the king of Israel (cf. 1 Kings 1:32ff.).

Hosanna, which is a call to the LORD to save now, together with the references to Son of David, King of Israel and He who comes in the name of the LORD, is an acclamation of Jesus as the Messiah and promised Savior who would save His people and establish an everlasting kingdom, a fulfillment of the promise made to David in 2 Samuel 7:16, where God said: “Your house and dominion will endure before Me forever, and your throne will be established by the LORD forever.”

This promise is spoken of again in Psalm 89:3-4: “You have said, ‘I have made a covenant with my chosen one; I have sworn to David my servant: “Your offspring I will establish forever, and build up your throne for all generations.”’”

Thus, the events of Palm Sunday were a declaration that Jesus is the long-promised Messiah, the Son of David and King of Israel who would save His people and establish an everlasting kingdom.

The people were calling upon Jesus to save them as God had promised. He was the one who would “redeem Israel from all their iniquities” (Psalm 130:8). And, this, just days before He was crucified and died for the sins of the world to provide that promised salvation!

And we too cry out: “Hosanna! ‘Blessed is He who comes in the name of the Lord!’ The King of Israel!” We pray that He would usher in the day of our salvation — the salvation he won for us upon Calvary’s cross.

Hosanna, Hosanna, Hosanna in the Highest! Blessed is He who comes in the name of the Lord! We praise You, Christ Jesus our Savior, and pray that You would come and establish Your everlasting kingdom and reign over us as our God and King. Amen.

Our Father who is in heaven, hallowed be Your name. Your kingdom come; Your will be done on earth, as it is in heaven. Give us this day our daily bread. And forgive us our debts, as we forgive our debtors. And lead us not into temptation, but deliver us from evil. For Yours is the kingdom and the power and the glory forever. Amen.

All Glory, Laud, and Honor

Refrain: All glory, laud, and honor to You, Redeemer, King,
To whom the lips of children made sweet hosannas ring.

1 You are the King of Israel and David’s royal Son,
Now in the Lord’s name coming, our King and Blessèd One.

2 The company of angels is praising You on high,
And we with all creation in chorus make reply.

4 To You before Your passion they sang their hymns of praise;
To You, now high exalted, our melody we raise.

5 As You received their praises, accept the prayers we bring,
O Source of ev’ry blessing, our good and gracious King.